A chimney is an important part of any home, as it allows heat and smoke to be released from the fireplaces or wood stoves. They are particularly necessary for homes with gas or oil-burning appliances, as they allow those types of fires to release their byproducts without being vented directly into the house. But what happens when a chimney starts leaking? There are several reasons why this could happen, so let’s take a look at 4 common causes of leaks before moving on! 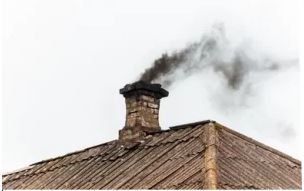 No Cover On Top of Your Chimney

One common cause of chimney leaks is a lack of protection on top. When the snow falls and accumulates, it can put too much strain on your flue if there isn’t already something to support it. If you don’t have any sort of roof covering at all, this could be contributing to your issue as well!

Water Inside The Flue

Another potential reason for water leakage in a chimney comes from conditions inside the flue itself. This would usually only occur with older chimneys. Still, sometimes mineral deposits can build up over time and create an unsafe environment for burning fires by trapping soot particles or other materials that shouldn’t enter into your home’s air supply system.

The chimney crown is the topmost portion of your flue, and it should be designed to withstand heavy snowfall. If you have an especially high volume of water running through your system or if there are particularly strong winds present where you live, this could cause damage over time that will eventually manifest itself as a leak inside the flue. If leaks like these sound familiar – don’t worry! There’s no need for panic; professional repairs can resolve these issues in no time at all, leaving you with safe access to one of your home’s most important features without any concern about its safety or appearance.

Worn Our Bricks and Mortar Joints

Natural Hairline Cracks in Brickwork Joints that can develop into Larger Holes over Time due to the Expansion and Contraction of the Chimney As it Heats Up and Cools Down. If you’re unsure, assess your chimneys for cracks regularly – if there’s one present, call a professional immediately! Leaky shafts like these usually require more invasive repairs such as replacing entire sections of brickwork with new bricks (and mortar!) where necessary. This is best left up to professionals; experienced masons will be able to restore your chimney back to its former glory without any issues at all!